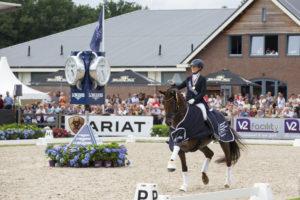 Victoria’s Secret is the new bearer of the title world champion of the five-year-old dressage horses. “A real superstar,” says the chairman of the judges Francis Verbeek. Beatrice Buchwald convincingly steered the by Walther Schulte-Böcker bred mare, last year the champion at the Bundeschampionat for mares and geldings, to the victory at the National Equestrian Centre at Ermelo. After her magnificent ride, the audience exploded in a thundering burst of applause for this incredibly talented chestnut mare of Rhenania Pferde GmbH. She scored a 10 for perspective. “Because we really don’t know what else we would like to see!” For the submission the mare received a 9.8. Buchwald presented the daughter of Vitalis out of a dam by Fidermark in a very friendly manner and the whole performance looked effortless. The elastic and controlled trot, in which Victoria’s Secret displayed great transitions, was awarded with a 9.5. The rhythmic, relaxed walk was marked with a 9.3. the 8.9 for the powerful canter brought the average to 95%: enough for gold. Besides the prize money, Beatrice Burchwald also received the magnificent Longines watch: the first time that this was awarded to a dressage rider. “I don’t know what to see, I have not fully grasped the meaning of it yet. Of course I was the favourite after winning the qualification, but that really does not make it any easier, it actually creates more pressure. However, Victoria’s Secret is not only an intelligent horse, she is also a mare with a lot of go and always wants to work. We could have easily ridden another round here.”

When she is asked about the future plans of the horse, Buchwald cannot give a decisive answer yet. “The owner purchased her when she was a foal and now lots of people are interested. Hopefully we can find a party that can support us, so we can have a great future together. Because I would love to ride her again next year in the championships for six-year-olds in Ermelo.” 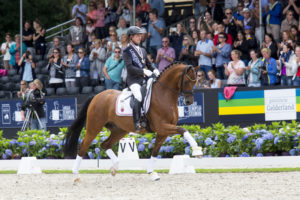 The silver medal was claimed by the Olderburger Quel Filou OLD (Quarterback x Stedinger, breeder Aloys Hinxlage and owned by Dressage Grand Ducan). Sascha Schultz rode the bay to a fantastic score of 93.20%: an immense 10 for the walk, twice a 9 for the trot and the submission and a 9.1 for the quality canter and a 9.5 for the perspective. “It was a true surprise for me to end up with a medal today,” comments a proud Sascha Schultz. “ I am honoured to stand next to Victoria’s Secret. I saw this combination and they are absolutely fantastic! On the first day, I was a bit too quick in the test, so today I tried to lower the pace a little. This worked very well. Quel Filou also loves people and loves to show himself, so he felt right at home here.” 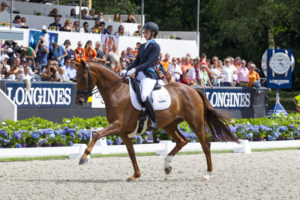 The bronze medal  was won by Bordeaux-daughter Guadeloupe Beau (dam’s sire Vivaldi, breeder P. Rulkes) with Kim van der Velden. The rider was complimented by the jury on her natural way of presenting the horse, that truly got the best out of the mare. The mare convinced especially in her breath-taking trot for which she received a 9.4. Together with a 9.2 for submission and 9.5 for perspective this resulted in an average of 91%. Kim van der Velden, making her debut at the World Breeding Dressage Championships for Young Horses, was speechless. “It was amazing and I really did not expect to win a medal. It was special to do this in front of my home audience, with all my family and friends that cheered us on. I really enjoyed it.”

Chairman of the judges Francis Verbeek was enthusiastic about the quality of the five-year-olds. “On behalf of the judges I would like to congratulate both the medal winners and the other participants. We have seen top horses and top performances. These three were absolutely the best, but also the overall quality of the horses in the final was high. We as the jury enjoyed these talents. We expect a lot from these horses in the future.”