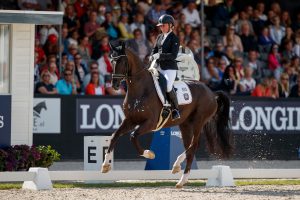 Concluding the LONGINES FEI / WBFSH World Breeding Dressage Championships, the final for the six-year-old dressage horses took place this afternoon. This final was again an exciting one. Adelinde Cornelissen made a big impression with the KWPN-stallion Governor STR, a son of Totilas out of the full sister of Adelinde’s top horse Parzival. The black pearl showed consistency throughout the test and especially his natural ability for collection and uphill frame swayed the judges. A 9.3 for his active trot, an 8.8 for his walk in which the the collected walk formed the highlight and a 9 for the canter in which, again, the ability to collect stood out, resulted in high marks for his gaits. The 8.9 for submission and 9.3 for perspective, brought him to the interim first place (9.06).

Mega-score
According to the judges, Ann-Kathrin Pohlmeier demonstrated very well how to ride a 6-year-old horse. Her Lordswood Dancing Diamond (Dancier x Wolkenstein II) received a 10 for his perspective! What a performance by this well-rounded dressage horse. The consistently active trot generated the ultimate grade for the Hannoverian gelding. “This horse possesses so much natural ability. He extends and then collects with so much ease while simultaneously his technique in the hind leg is outstanding.” For the walk the Dancier-son received a 9.3, for the uphill canter an 8.5. “We really appreciate the nice contact and therefore award him a 9.8 for submission.” Consequently, the gorgeous gelding took over the lead with a mega-score of 9.72.

Quite a challenge to deprive him of the gold, but Severo Jesus Jurado Lopez began a pursuit with the Oldeburger Quel Filou (s.Quaterback). A small mistake made by Severo, but what a talented and light-footed horse, this last year’s silver medal winner. For the gaits, the horse again received high marks. The expressive trot with lots of freedom in the shoulder earned a 9.8, the powerful canter got a 9.5. the rhythmic walk was rewarded with an 8.5, for perspective a 9.4 was granted. However, the mistake by Severo in the test and a disruption prior to the flying changes meant a deduction and a lower score for submission, which seemed to mean no longer an outlook on a medal.

Because the Sandro Hit-son Sir Skyfall and Frederic Wandres excelled with his lengthy walk, in which he used his whole body (9.5), and active canter (9.2). Via an 8 for the trot, an 8.7 for the submission and an 8.9 for the perspective, the average of the Oldenburg stallion generated an average of 8.86. The scoreboard displayed it earned him the bronz medal, behind Governor STR and the golden Lordswood Dancing Diamond. However, a computational error was uncovered and changed the rankings substantially. The bronze medal was won by Quel Filou and Sir Skyfall dropped to the fourth place. FEI Official Jacques van Daele commented on behalf of the technical jury: “An unfortunate mistake that we regret as a jury. It is a human error and they cannot always be prevented.” 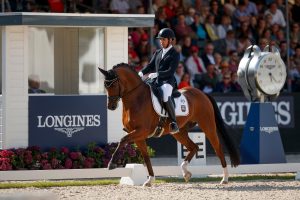 Severo was happy with his medal. “Of course, I feel sorry for Frederic, but we all make mistakes. We have to be honest and these things happen. As a matter of fact, it happened to me in the test. It really indicates the quality of Quel Filou, that he wins a medal despite my mistake!”
Thus, the silver for Adelinde Cornelissen, that came in ninth place in the qualifiers. Adelinde: “After the qualification round I felt it was a really good test, but very safe. So I thought to myself, if I want to achieve something here I must step on the gas and take some risks. Governor and I gave it our all and we succeeded!” When asked if she recognizes a little bit of Parzival in the black KWPN-stallion, she responds affirmative: “In the prize giving ceremony he is much more relaxed than Parzival used to be, but that must the influence of his sire Totilas. Besides that, Governor  – just like Parzival’s full brother Fleau de Baian – has the same go, willingness to work and the absolutely amazing mentality as Parzival. At competitions they never let you down and always want to give their best, that is really important!” 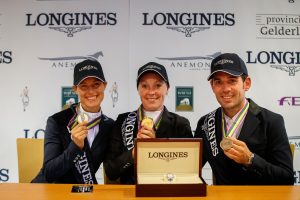 Gold for the Hannover Lordswood Dancing Diamond. Anne-Kathrin Pohlmeier was proud of her black bay. “I really enjoyed my ride today, it felt unbelievable. He was so focused and attentive. This allowed me to present him more correct than in the qualifiers and show even better the qualities he possesses. This ride and the golden medal give me an incredible feeling, one I will never forget. He is under my saddle for three years now and from the first time I was aboard him I knew he was talented. Everything comes so easy to him and he always does his best. We will see what the future will bring for us!”