Group of competitors in final of seven-year-olds complete 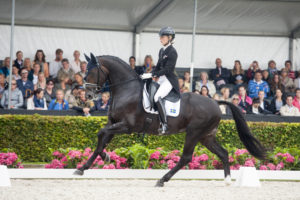 This morning the seven-year-old horses made their appearance in the small final to obtain one of the three wanted tickets for the final tomorrow. The Swedisch Ida-Linn Lundholm rode her Zenon-son Eclectisch to 76.178%, the winning score. Eclectisch is an amazing horse with a beautiful front. 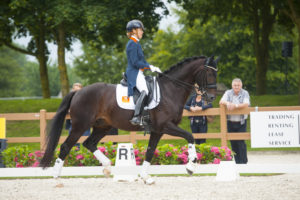 He was followed by Eastpoint and the Dutch rider Lynne Maas. Eastpoint is a son of Westpoint that himself was crowned world champion at the age of six. The happy Eastpoint showed a pleasant test in which the canter formed the highlight. The end result was 74.744%. 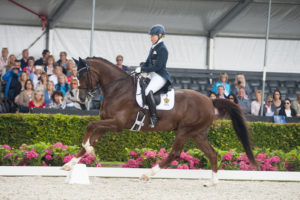 Yvonne Österholm steered the Quarterback-son Quarton to 74.704% and that meant the last ticket for the final was awarded to this gelding. Chairman of the judges Dr. Dietrich Plewa was convinced that this top three is the right selection to add to the final. “With respect to their level and what they have showed today, they belong to the best seven-year-olds. In my opinion, they even have a good chance to compete with the top. I expect that we will see dressage sport of the highest level tomorrow. Partially because these horses, which are still quite young, have gotten used to the surroundings by now and therefore can show their potential even more than in the qualification, where some still displayed some tension.”

Twofold world champion Sezuan and Dorothee Schneider are the ultimate favourite for the victory. “That horse has so much potential by nature, but it is still a young horse and that means that a few technical mistakes can be decisive. I am convinced that also the remaining horses have a good shot at improving their performance compared to their qualification. So who knows, maybe they will surprise us tomorrow! I expect an exciting final.”