Fiontini right on track to hattrick 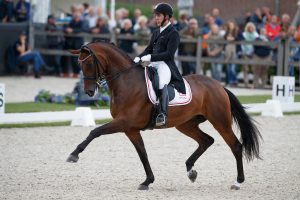 Two-fold World Breeding Dressage Champion Young Horses Fiontini is right on track to win the title once again and score – just as Sezuan did last year – perform a hattrick. The extremely talented daughter of Fassbinder out of a dam by Romanov impressed the jury with a fantastic performance. In an impeccable test the Danish Warmblood-mare scored under the Spanish rider Severo Jesus Jurado Lopez the following grades: 9.5 for the trot and canter, a 9 for the walk, a 9.3 for the submission and a 9.8 for perspective brought the total to an average of 94.200%. the 82.578% for the technique set the final score to 88.389, which meant the victory in the qualification round. Severo was thrilled: “What a great horse, I am really happy with her. She has been in my stables since she was four years old and I never get tired to ride such tests with her. Now I first have to focus on my performance at the 5-year-old class tomorrow, but when the final comes, Fiontini and I will go for gold.” 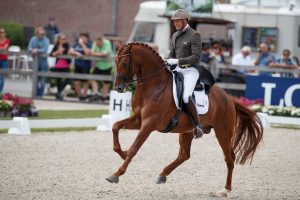 The best 12 horses of today placed themselves directly for the final on Saturday. On the second place, we find the Vivaldi-son President’s First Apple. The chestnut gelding was ridden by the Dutchman Patrick van der Meer, who won gold in 2006 with Uzzo at the 5-year-olds. “I am super happy with how it went. President’s First Apple has set a great performance today and to come in second after such a fantastic winner is no disgrace.” The gelding received a 9 for his uphill canter and perspective. With 81.286% this combination is off to a great start and certainly has a chance for one of those desired medals. 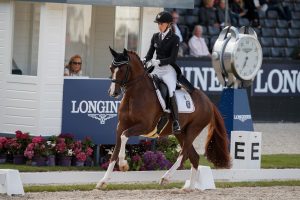 Fellow Dutch rider Kirsten Brouwer presented the Hannoverian Soliman de Hus-descendant Sultan des Paluds to 81.239% and placed third. Brouwer also claimed the fourth position with her second horse in this age category, the KWPN-stallion Ferdeaux (Bordeaux x Ferro). “I am satisfied with my third and fourth position,” reacts the rider happily. “Both of them are quite sensitive so the wind caused some tension, but they really did their best.” Also the president of the judges Maria Colliander responded enthusiastically. “It was clear who stole the show. However, I want to note that it was great to see a total of 39 seven-year-old horses in the ring today. That this age category is so popular, is really good for the dressage sport. We saw a good number of well-prepared horses and some super quality horses. Several of them are really interesting for the future.”

Tomorrow afternoon the small final is ridden, the top 3 also earns a starting ticket for the final Saturday afternoon.