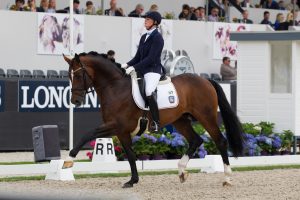 Right after the denouement of the five-year-olds today, it also became clear which 15 6-year-olds may start in tomorrow’s final. President of the jury Susanne Baarup was satisfied with the tests she saw today: “A lot of horses performed substantially better today. Especially the top three showed some high-quality tests today. They do not only absolutely deserve a place in the final, they truly have a chance to do well.”

Winner of the small final was Baccardi with Claudia Rüsscher. The Westfalen stallion by Belissimo M showed a consistent performance. His walk was rewarded with a 9.2, but also his trot (8.5) and canter (9) are distinct qualities of the bay. An average of 8.84 procured his appearance in the final. His rider was relieved after their win: “You never know what is going to happen. These horses are so young and the surroundings are impressive. We never run into any problems during our tests, but yesterday was not flawless. That made me quite nervous for today, but we managed it well. And Baccardi always does his best!” 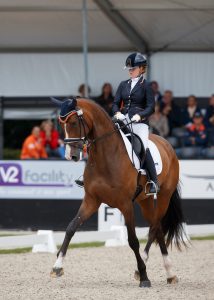 The second prize was shared by the Danish duo Ellegaardens San Droneur with Jacob Noerby Sorensen and the Dutch Great Lady TC with Jeanine Nieuwenhuis. Both achieved an average of 8.6, wherby the San Amour I-son Ellegaardens San Droneur received the best grade for his walk (9) and the KWPN-mare Great Lady TC (Bretton Woods x Osmium) for her trot (9.1). Amongst the six-year-olds the studbooks Hannover, Oldenburg, KWPN and DWB are well represented, of which both the KWPN and the Danish Warmblood studbook are represented by four horses in the final.