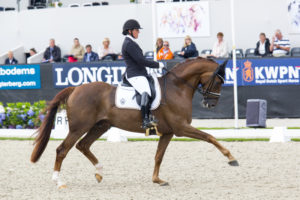 The 27 six-year-olds that did not place themselves directly for the final yesterday, re-entered the arena this morning for the small final. In this class they competed for the last three tickets for the prestigious final that starts Sunday morning from 11.00hrs onwards. Bohemian (s.Bordeaux), Rock Forever II (s.Rockwell) and Fiera Girl (s.Faustinus) all scored above 80% and thereby made up the top three. 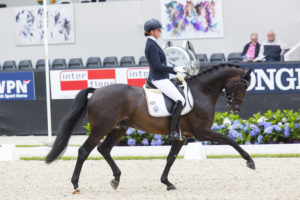 The Danish rider Katrine Kraglund steered her dark chestnut Bohemian to 82.40%. Hereby he slightly outperformed the other Westphalian-bred horse Rock Forever II. Bohemian received an 8.4 for his trot and 8.3 for his perspective, his highest mark was an 8.7 for the walk, but this was bested by Rock Forever II. The Rockwell-gelding was presented by Ann-Kathrin Wilting and obtained a 8.9 for this gait. However, he in turn had to give in on the trot and this resulted in a second place with 82.20%. 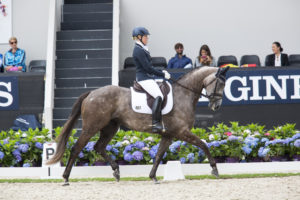 Under Yvonne Österholm, the SWB-bred Fiera Girl (s.Faustina) claimed the much-desired last ticket for the final with 80.80%. Chairman of the judges Maria Colliander says to be satisfied with today’s outcome. “We are convinced that we really found the three horses that deserve a place in the final the most. I was especially impressed by the winner Bohemian. Yesterday we had to mark his submission with a three, probably the lowest grade I have ever given at this competition. Today, his rider Katrina Kraglund seemed determined to turn it around. The pair now scored 4.5 points more. The most notable of Rock Forever II is probably his incredible walk and good canter. Number 3, Fiera Girl, we liked because of her even quality. She was more or less good in every aspect.”