Victoria’s Secret (s.Vitalis) in the lead in qualifications five-year-olds 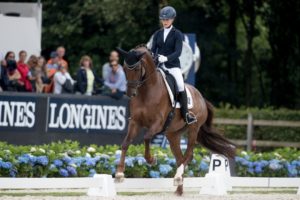 The World Breeding Dressage Championships for Young Horses kicked off this morning with the qualification round of the five-year-olds. 45 combinations showed their talent for dressage and treated the audience to a full day’s programme. The best twelve competitors have placed themselves directly for the finals and tomorrow in the small final three more horses will be added to this group.

The quality of this group was very good, which became clear as the top 12 all scored more than 80%. Chairman of the judges Francis Verbeek: “We have seen fantastic horses that possess lots of quality. Gorgeous horses that in general showed three good gaits. The top distinguished themselves today in, amongst others, rideability. The winner of today, Victoria’s Secret, is a horse ‘to die for’. She really does not look like a five-year-old: so constant and beautifully ridden, this mare has no weaknesses. She gave us goose bumps. Today she was by far the best, but that’s the thing with young horses: tomorrow it can all be different.” 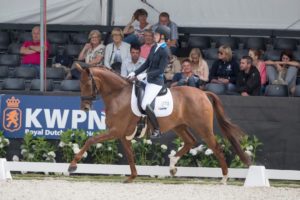 The German rider Beatrice Buchwald and her Vitalis-mare Victoria’s Secret scored 93.40%, that included a 9.5 for the canter and perspective and thereby was far ahead of number two, Guadeloupe-Beau (s.Bordeaux) with Kim van der Velden (89.80%). Francis Verbeek: “The number 2 Guadeloupe-Beau was also pleasantly ridden. Kim really showed how you let a young horse perform a five-year-old test: no pressure, but honest and technically ridden. With beautiful contact and acceptance and a good length in the neck. 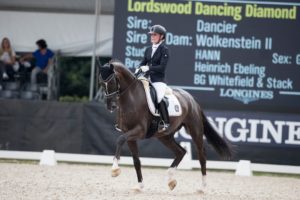