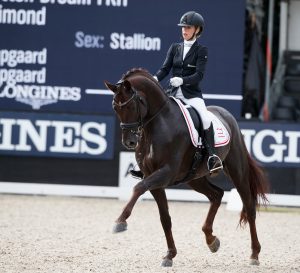 This morning the small final of the five- and six-year-olds was ridden, in which the top 3 could earn a ticket to tomorrow’s final. Amongst the five-year-olds the three additional tickets for the final are awarded to three stallions: Atterupgaards Botticelli with Selina Solberg Vittinghus, Dragon Welt under Ida-Linn Lundholm and First-Step Valentin with Larissa Pauluis. The last one on the starting list, Danish stallion Botticello (Benneton Dream FRH x Caprimond) made the biggest impression on the judges and the spectators. The pair – in the qualification round 29th with 7.52 – took revenge via an incredible performance. The stallion moved with lots of suppleness and suspension to the highest score of 9.1 and was awarded a big round of applause. The chestnut received the best grade for his trot (9.8). The Danish rider Selina Solberg Vittinghus sighed of relief after her test: “The first day Botticelli was really tense. The wild wind caused the tents to make noise and flowers to drop over. He is a very sensitive horse and that was just a bit too much. I hope and believe he has calmed down now and today he showed to be worthy of a place in the final. We have all to win and nothing to lose so we will give it our all. Whatever happens, I will surely enjoy the ride.” 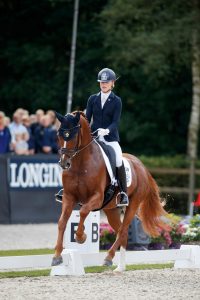 The Swedish Ida-Linn Lundholm steered the Hannoverian Dancier-son Dragon Welt to a close second, following by only 2/100ste point. In Sweden the combination wins every class they appear in and now they are among the select few in Ermelo that scored a 9 or above. The walk received an 8, but the impeccable points for his other gaits, submission and perspective bring the total to a 9.08. The Belgian Larissa Pauluis had her performance with the Vitalis-descendant First-Step Valentin rewarded with an 8.72 and is thereby also added to the starting list of the final. The entire list in starting order will be published online this afternoon after the drawing. “The top three clearly listened to our comments in the first round,” says the president of the jury Eddy de Wolff van Westerrode jokingly. “We could award high points today once again. As expected in a class for 5-year-olds, some horses seemed a little bit tired, while others were clearly much more relaxed than in their first test. The three horses that have qualified themselves for the final showed some great things today and can surely impress in the final coming Sunday.”

Tomorrow’s final forecasts to become a thrilling battle between 15 promising talents. With a bottom score of 8.4 and an average of 9.76 for the current leader, we are sure to enjoy lots of quality horses in the final. Hannover is the top producer with 6 horses, followed by Oldenburg with four representatives in the final.