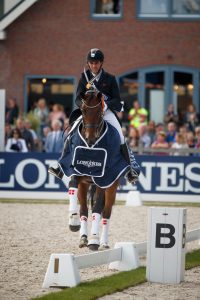 Today the final of the LONGINES FEI / WBFSH World Breeding Dressage Championships for seven-year-old dressage horses took place. Dutch rider Patrick van der Meer performed a very good test with his KWPN-mount President’s First Apple (Vivaldi x TCN Partout). Except for a small mistake in the flying changes, the stallion moved fluently throughout the test. “Truly a horse for the future!” exclaimed the jury that rewarded the stallion with a 9 for perspective. However, he had to accept a superior in the Danish Anne Troensegaard and the Trakehner Kipling (Hofrat x Hohenstein E.H.). A 9.2 for perspective was bestowed upon the bay by the jury, who complimented the manner Kipling was trained. Kipling claimed the bronze medal, but the biggest battle was the one for gold. In the past, the Dutch Kirsten Brouwer already took home medals at the world breeding dressage championships in every colour. Her Sultan des Paluds, the Hannoverian by Soliman de Hus (dam’s sire De Niro), was convincingly moved to that moment’s highest score of 83.515%. Her harmonious test got her a 9 for the powerful trot, the walk with much tact and remarkably well-executed half-turn received an 8.4. the active and nice uphill canter was given an 8.6. An 8.9 for submission and a 9 for perspective, secured the 5th medal at World Breeding Dressage Championships for Young Horses for Kirsten.

The last pair to enter the ring was the Spanish rider Severo Jesus Jurado Lopez with Fiontini (Fassbinder x Romanov) and they had one aim: the third title. For two consecutive years he steered the athletic bay DWB-mare to the world title. Last year, the Danish studbook celebrated the third victory by Sezian, now the pressure was on for Fiontini. However, the pressure was not noticeable in the test, the bay went relaxed to gold. Except for one mistake in the flying changes and a not optimally executed pirouette, the performance was convincing to say the least. Especially the quality in collection stood out. Just like Sultan de Paluds, Fiontini received a 9 for the quality trot. The walk was the highlight according to the judges (9.5) the active canter received a 9.2. The 8.6 for submission and the 9.1 for perspective added up to the winning score of 85.656%. Thus Severo Jesus Jurado Lopez won his second Longines-watch in a row.

“I will exchange this one for the lady edition and it will be a gift for my girlfriend,” says the Spanish rider that indicated that for now, he will continue riding Fiontini – despite the sale of the mare. Her new owner trains with my employer Helgstrand Dressage and we train together often. I hope that the future will include many more horses like Fiontini! She is so talented and has so much quality… in the arena she is even better than outside of it, that is a fantastic feeling as a rider.” 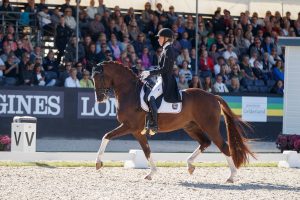 High expectations
Kirsten Brouwer obtained a medal for the fourth year in a row, the silver made her very satisfied. “I am super happy, it is a fantastic horse t ride. He was slightly tenser than Thursday but in the ring, he kept going and we could improve our score. I have enjoyed our ride! He has so much talent for the more challenging figures, so my expectations are high.”
Bronze for Anne Troensegaard with Kipling, that was in sixth place in the qualification round. “Thursday was a bit exciting with the wind, today the walk went a lot better and during the test he became more and more relaxed. Last year I would love to come back with another horse! You easily get accustomed to winning a medal,” says the rider jokingly.

Compliments
In the press conference, Sharon Rode replaced president of the jury Maria Colliander that had to leave early to catch her flight. Rhodes provided the jury comments after each test, a task she was happy to fulfil. “It is not always easy to be a commentator, but today it was! Wonderful horses and impeccable presentation by the riders. It is amazing to judge such talented horses. Kipling and Sultan de Paluds are both horses with a fantastic trot. And oh Fiontini.. I am in love with her. What a horse! I also would like to compliment the organisation; the World Breeding Dressage Championships in Ermelo is an marvelous event.”
Judge Dietrich Plewa added: “In the past there has been some remarks that the horses were too tense and presented with not enough length in the neck. Today’s horses were all properly trained and showed lots of suppleness and natural ability. Compliments to all the owners, riders and breeders!”