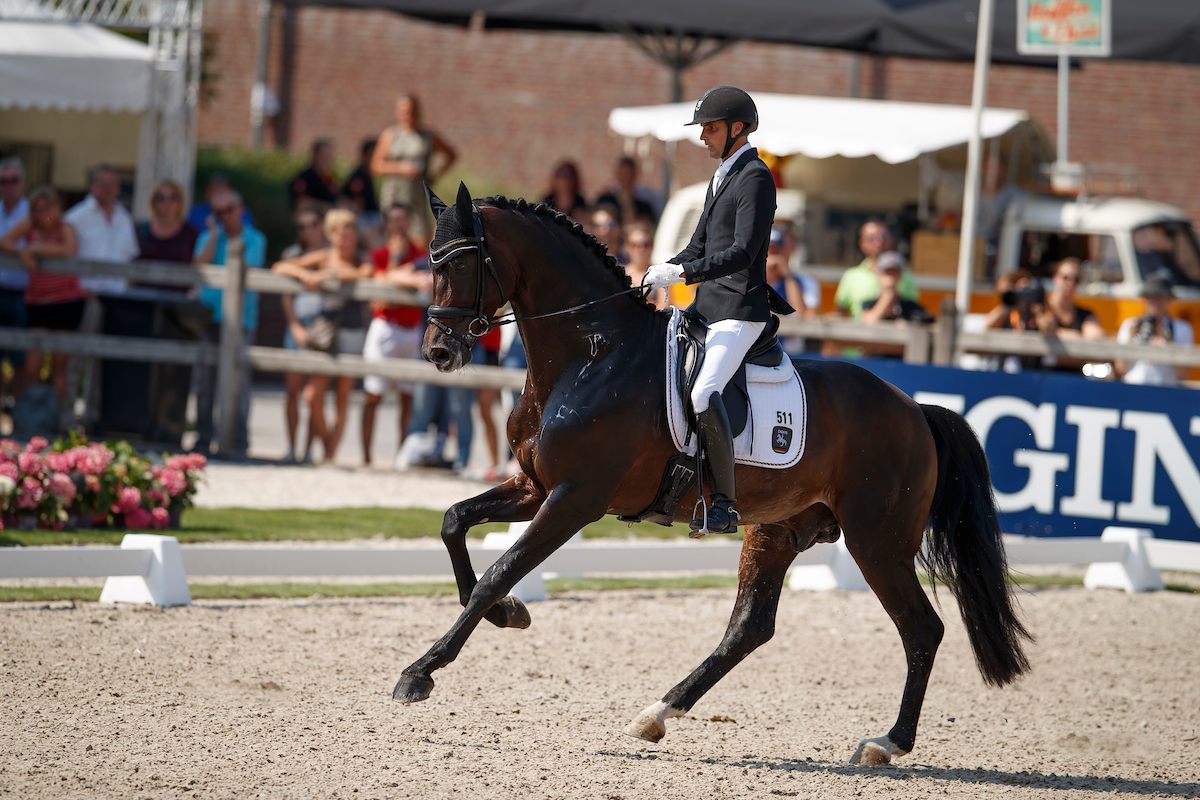 What a quality in the final of the Longines FEI/WBFSH World Breeding Dressage Championships for 5-year-old dressage horses. A dream final full of big talents that were all presented in a correct manner. The winner of the first qualification, Revolution (Rocky Lee x Rouletto) moved to a magnificent 9.62 under Andreas Helgstrand, securing the world title. “A rockstar, a powerhouse!” praised commentating member of the jury Maria Colliander the by Yesemin Yanik bred Westphalian stallion. Revolution scored no less than two 10s, for his quality, uphill jumped canter that stood out in balance and power. Also the perspective was awarded a 10 by the jury. “If you possess such good gaits, so much power, use of the back and clearly have the right work mentality, you deserve a 10.” It was a close call, the powerful trot almost received the ultimate grade as well, it turned out to be a 9.8. The relaxed walk earned a 9 and the submission was rewarded with a 9.3. Revolution is owned by Hanni Kasprzak and Helgstrand Dressage. Andreas: “I always say that all of our horses are for sale, but this one is special to me. What else can you wish for? He has such a nice character, it is out of this world. I previously owned the triple world champion Sezuan, but I think Revolution is even more complete.”

The silver went to the by Henrich Hiesselmann bred Destacado (Desperados x Londonderry) that was appealingly presented by Matthias Alexander Rath. A true happy athlete, this Hannoverian stallion of Friederik Lohse and Gestüt Schafhof that scored a beautiful 9.48 average. He got a 10 for the energetic and relaxed walk. “If it were possible, I would have given him an 11!”, said president of the judges Mariette Sanders. “Wow, wow, wow,” said commentating judge Maria Colliander – who earlier expressed her wish to have this stallion in her own stables – right after the test. The functional canter was rewarded with a 9.4, the fluent trot with an 8.9. The perspective was valued at a 9.7. The textbook example of harmony, this performance of Rath and Destacado. “He has been in our stables since he was three and even though I have not always been riding him ever since, I know him inside out. This helps to rightly prepare a horse for such a competition, I know what works best for him. It is important that the horses enjoy their work, so that is something we keep in mind in our training.”

The bronze medal was claimed by Sir Donnerhall-daughter Candy OLD (ds. Fürst Heinrich) and Eva Möller, that was in close pursuit of the silver at 9.38. “What a beautiful, charismatic ballerina” praised Colliander the light-footed mare that deservedly received a 9.7 for perspective and 9.4 for submission. Her elastic, active trot scored a 9.8, the walk was rhythmic and energetic, but the mare could display a little more suppleness in the back: an 8.6. The canter was well-balanced and uphill: a 9.4. Eva Möller was extremely happy with the test of the horse bred by Paul Wendeln  & owned by Hilde and Paul Wendeln. “The jury thought I rushed through the test on the first day, so I tried to take this into account and it obviously worked!” says Eva Möller. “Candy is a sensitive horse, but all good horses are. I have been riding her since February and it took some time to get to know her, but I think I succeeded in that,” says Eva who temporarily took over the reins from Helen Langehanenberg who gave birth to her second child in June. “This was our last ride: as agreed, Candy will go back to Helen. So I hope, this is not her last child,” joked Eva, who clearly gets along well with the dark bay mare.

“The top 3 is a set of very complete horses”, says president of the judges Mariette Sanders. “These surroundings are not easy for young horses, but they were well-managed and presented correctly. Good riders bring out the best in these young talents. I also would like to compliment the breeders that were successful in making the right match between mare and stallion. That is of utmost importance for the future of our sports, that we continue to breed better horses and that top riders develop their talent.”

Tomorrow we enjoy some top talents once more, with the finals of the six- and seven-year-olds on the program. We would like to see you again in Ermelo or you can watch via the FEI Livestream of the FEI.