The class for four-year-old stallions was won this afternoon by Fürst William  Fürst Wilhelm x Lord Sinclair I) with Severo Jurado Lopez. The striking bay stallion moved seemingly easily throughout the test, which was awarded with a whopping score of 92%. Chairman of the judges Mariette Sanders-Gansewinkel was wildly enthusiastic about the Oldenburger stallion. “This horse has so much potential, you can already see the qualities for the higher levels! In the extended walk the stallion could have showed more overstep, but given this quality he still receives an 8. The light-footed trot gets a 9. The canter is like a textbook example: since we are not allowed to grade an 11, he receives a 10. Severo presented the stallion in a fantastic manner and as the test proceeded, the harmony improved even more: a 9.5. What a talented horse, for his prospectiveness we gave him a 9.5!”

Adelinde Cornelissen steered KWPN-horse Henkie (Alexandro P x Upperville) to an incredible percentage of 91%, resulting in a second place. This bay also received wonderful scores of a 9.5 for the walk and canter, a 9 for the trot and talent and an 8.5 for the harmony. “Henkie showed lots of expression in the trot, his walk is like a textbook example. The canter is fantastic.” The third place was claimed by the British rider Charlotte Fry and Hey Joe (Diego x Lord Leatherdale). This KWPN-bred and at NRPS approved stallion impressed with his trot (9) and canter (9), but had to give in on the walk (6.5). The scoreboard even noted a 9.5 for the submission and for his talent he received an 8.5. 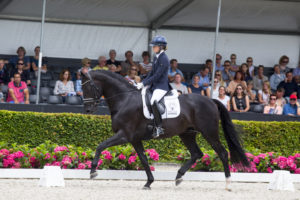 Thus these 3 stallions were invited for the honorary lap, with Fürst Wilhelm in the lead. Severo Jurado Lopez was proud of his bay dressage prospect. “It is an amazing horse, he has so much potential. It’s incredible to ride him: you get in the saddle and he simply gets it done. So much fun!”