Everdale wins Stallions of the Year 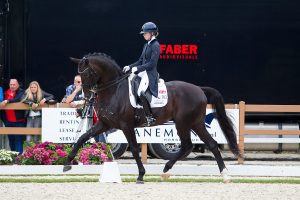 Stallions of the Year, a class for approved stallions at Prix St. Georges level stood out in diversity. Out of nine contestants, eight nationalities, seven studbooks, the KWPN-stallion Everdale (s.Lord Leatherdale) was crowned champion. The second place was claimed by the KWPN-stallion Dark President’s D&R (s.Wynton) for whom this class formed his international debut.

Everdale (Lord Leatherdale x Negro) scored 72.85% for his Prix St. George test. The blackbay stallion showed off his power in the extended trot. “He felt fantastic,” says Charlotte Fry. “Everdale loves the attention of such a big arena. The trot felt full of energy and the changes were flawless, although he might have been a bit too sharp.” Directly afterwards, Fry shares that it is not Everdale that she takes to the Youth European Championships in Roosendaal, but his more seasoned stable mate Dark Legend (s.Zucchero).

The KWPN-stallion Dark President D&R (Wynton x G.Ramiro Z) was a close runner-up with 71.93%. Presented by the Glock0rider Riccardo Sannavio the stallion trotted with lots of front and exceptional expression. Especially in the extended trot, the stallion demonstrates his qualities optimally. Small mistakes in both flying changes prevented Dark President D&R to surpass Everdale.