Dark President D&R retaliates in Stallions of the Year-Freestyle 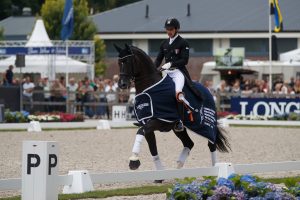 The Stallions of the Year, a class for approved stallions at Small Tour-level, continued with a Freestyle to music in the main arena. Between the final of the five-year-olds and the six-year-olds, it was the charming Dark President D&R that made a stance by scoring the highest marks. In the classical test the Wynton-son obtained a second position, this time he went the extra mile and won the freestyle to music. The KWPN-stallion Everdale, yesterday’s victor, had to accept the second place.

Dark President (Wynton x G.Ramiro Z) and the Glock-rider Riccardo Sannavio moved convincingly through Freestyle to music. It was only their first freestyle at international level, but the stallion certainly makes a lasting impression in the extended trot, expressive half-pass and beautiful frame. With ears pointing forward, he performed a near flawless freestyle. The good-looking stallion showed off a great use of the foreleg in the trot, yet still needs to get used to the applause. The black stallion led the way with 74.87%.

Lord Leatherdale-descendant Everdale (dam’s sire Negro) was on the path to victory with the win in the Prix St. Georges, however in the freestyle to music the blackbay stallion had to move over for Dark President. At the tunes of Daddy Cool, the stallion demonstrated his ability with his rider Charlotte Fry. Especially in the pirouettes the stallion, that is also successful in breeding, showed off his ability for collection. The difference with the winner turned out to be small; 74.23% for the stallion owned by Van Olst Horses.