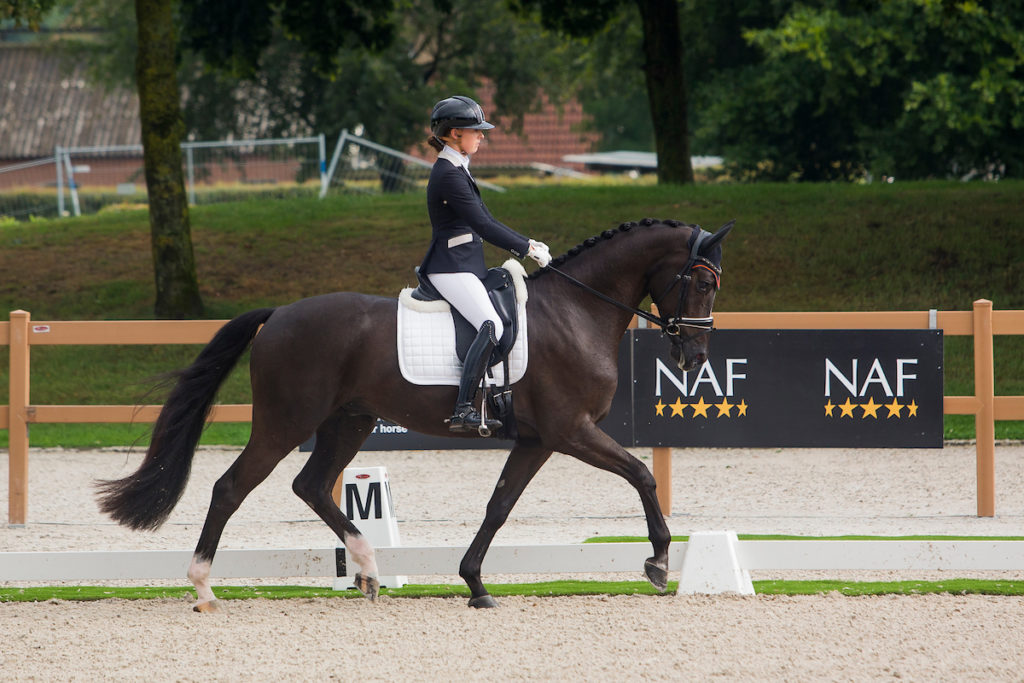 This afternoon, the Sport Pro Horses small final took place. A consolation class for the four-year-old dressage horses. In the lead, three KWPN-horses, of which the highest score was achieved by Killer, a son of George Clooney (ds.Tolando). The by H. van Houtum bred bay gelding moved to the winning 8.32 average under Sjuul Spelt, receiving an 8.5 for trot, canter and submission. Nicolette van Leeuwen steered the stallion King Leatherdale (Lord Leatherdale x Rinaldo, breeders J. van Oort and A.H.M. van Oort) to an 8.28 total, his highest marks awarded to submission (8.5) and perspective (8.6). In third place Marjan Hooge and Kadans SW (Vivaldi x Lancet). The stallion, that was bred by E.W. Breukink and A. Breukink Menger, displayed three solid gaits and was awarded the class’ top note for the walk: 8.6. An 8 for trot and an 8.6 for canter brought the total to 8.22. President of the jury Christoph Hess: “I think it is a step in the right direction to have a 4-year-old class done in the way it was set up in Ermelo. Horses, especially young horses, like to be in company. These 4-year-olds still have to learn everything and get used to the entourage, such as the flags, audience, loud speakers, et cetera. So, I was really surprised how relaxed the horses were. Plus, the riders did a good job in presenting them in a calm, natural manner.” He continues: “We have seen a lot of really good horses, but more importantly: there was no horse that was not good enough to be ridden in this test. Thus, we can conclude it was a good test pilot and we would like to reward the organization with a 10. Undoubtedly, this is great preparation for the next starts in international classes and maybe even for the coming World championships. Of course, it is very important that the riders now do not ask too much of the horse.”

Contrary to the five-, six- and seven-year-old class, this top 3 does not receive a ticket to tomorrow’s final. For a four-year-old, it would be too much to ask to perform three days in a row. The top 10 of the first round will come back for the final tomorrow, starting from 15.00hrs onwards.