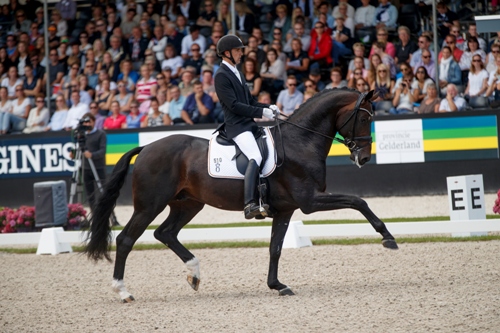 The so-called Master List, the list containing all the participating combinations of the World breeding Dressage Championships for Young Horses, has been published. Over hundred riders show 125 young talents, representing no less than 23 countries.

The audience is treated to a wide range of new faces with 43 five-year-olds on the schedule. Led by president of the judges Mariette Sanders, the youngest horses are reviewed on their gaits, submission and perspective. The 5-year-old category is always one to look forward to, as it’s the first chance to spot the champions of the coming years. This is also supported by the remarkable share of 2017’s five-year-old finalists that again may depart for Ermelo to pursue one of the prestigious medals. One of them is Andreas Helgstrand and his Ferrari OLD, the pair took home the silver last year and coming edition they enter the battle once more, this time in the six-year-old class. They can expect some heavy competition from amongst others Jan Moller and Hesselhoej Donkey Boy, that captured the bronze by a minimal difference last year. For 2018, the president of the jury for six-year-olds is Dietrich Plewa.

Last year, the six-year olds silver medal went to Governor STR and Adelinde Cornelissen, this year they may take another chance in Ermelo. The starting list of over 40 talented seven-year-olds already reveals that obtaining a medal will not be an easy task. One of last year’s finalists that is again expected to enter the ring is also a Totilas-son: Straight Horse Don Tamino, halfbrother to the well-known Sezuan that wrote history scoring a hattrick at the World Breeding Dressage Championships for Young Horses. Also Simone Pearce acquired a ticket for the finals last year with Feodoro, where they scored remarkable well on the gaits and perspective. No doubt that the Australian rider will try to step up her game to ensure a top-three result. Jean-Michel Roudier chairs the jury for the seven-year-olds.

The Longines FEI/WBFSH World Breeding Dressage Championships for Young Horses takes place from 2-5 August. Do not miss your chance to watch the talents of the future compete for the highest honour! Ensure yourself a seat and order your tickets online.