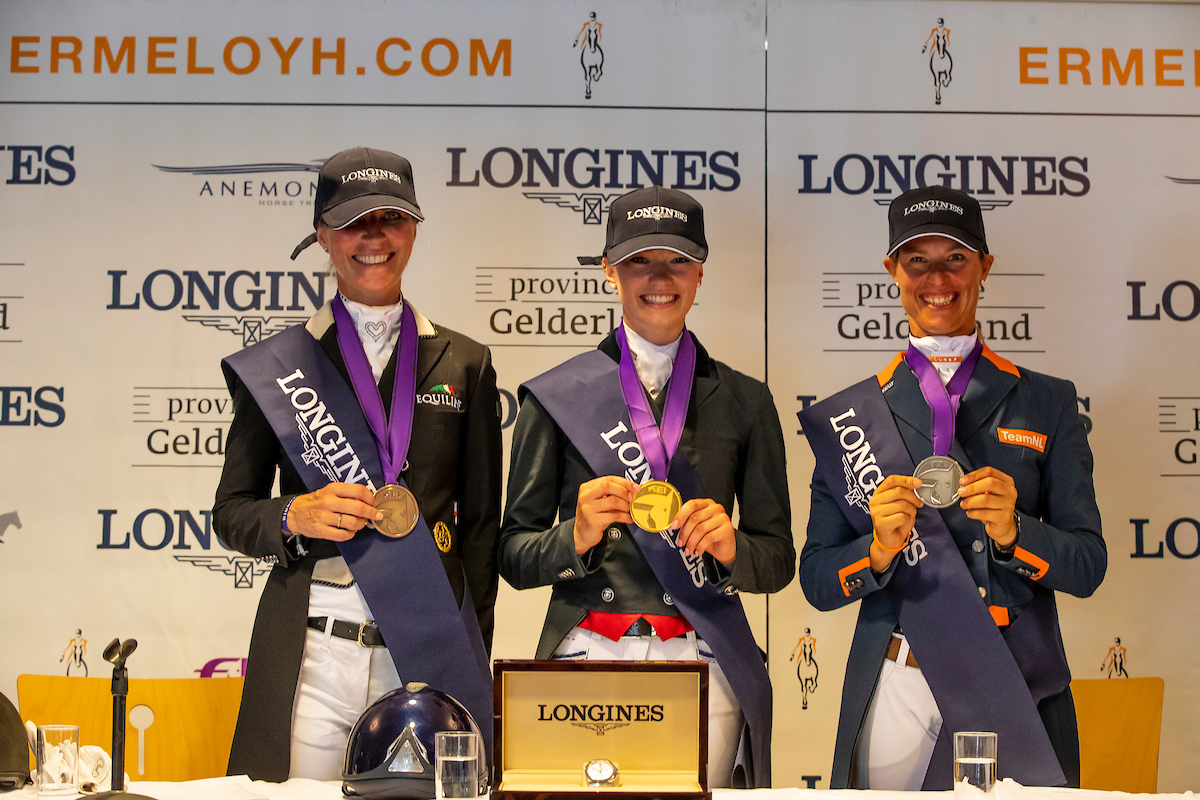 What a denouement in the final for seven-year-olds in Ermelo this morning. The top 4 of the intermediary ranking were still at the top, but all on a different position. The eventual top 3 are solely stallions, the gold and silver went to KWPN-stallions Glamourdale and Governor and the leader of the intermediate rankings Fuersten-Look had to settle for bronze due to a costly mistake. 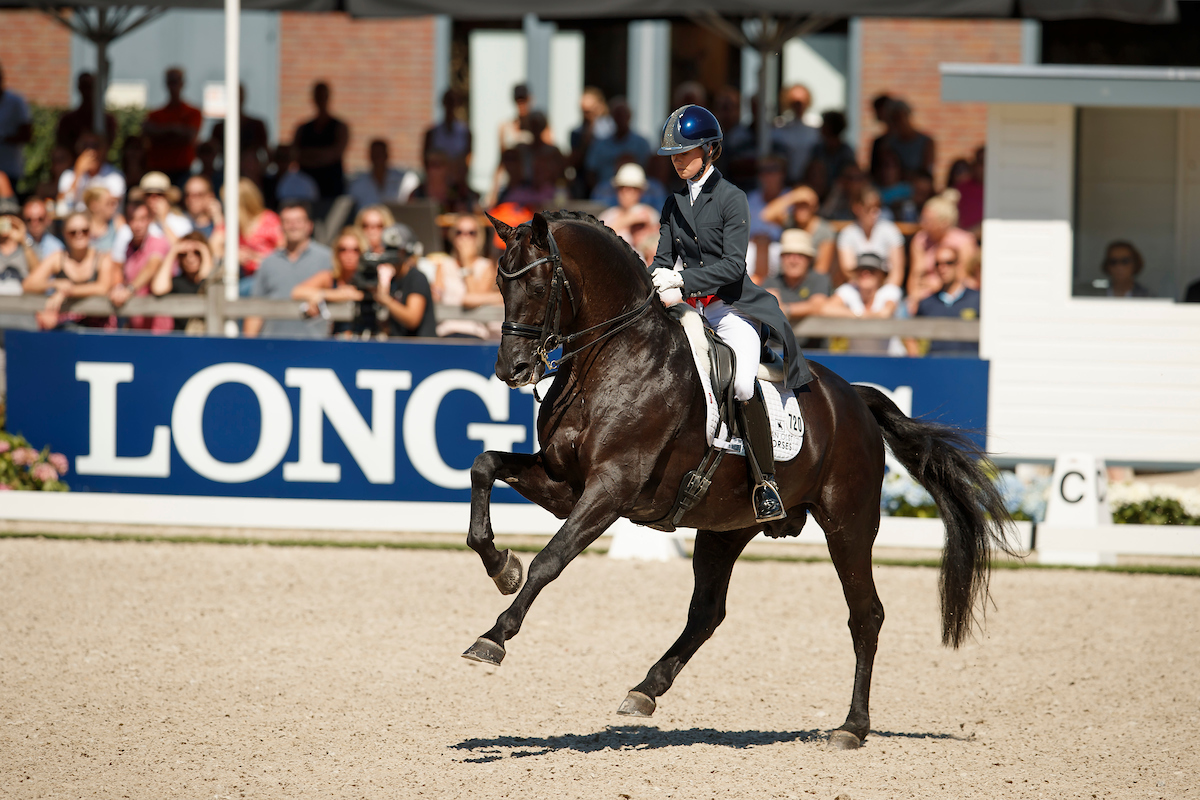 Glamourdale (Lord Leatherdale x Negro) started of in the final from place three in the rankings, but what a performance of this black powerhouse, that was well-presented by the British Charlotte Fry. The by Joop Rodenburg bred stallion of Van Olst Horses gave the jury goosebumps with his impressive moves. “What an incredible final”, says commentating judge Susanne Baarup. The trot is very powerful, with lots of impulsion. A beautiful rhythm, also in the half-passes. For a 10 we would like to see a more noticeable difference in the transitions to the extension, so a 9.8.” The lowest mark, a 7.6, was given to the walk that is a pure four-beat but could display more overtrack and freedom in the shoulder. “However, the powerful canter has so much quality, nice from the ground and with so much ability to collect that we happily give a 10”, says Baarup. The lovely changes and contact resulted in a 9.4 for submission and a 9.5 for perspective. “An attentive and work-willing horse that undoubtedly has a bright future ahead of him.” The total of 87.050 proved enough for the world title. “I have to thank Glamourdale, he gave me all he’s got!”, says an exuberant Charlotte Fry. “He really knew how important this was, he left it all in the arena. I have not watched the last ride of Isabel Freese, I was too nervous. And then I heard a steward say: ‘Charlotte Fry is the winner’. I was speechless, I have never experienced something quite like this. I cannot believe it, I think I should cry, but it has not really dawned on me yet. I am so thankful that I get to ride such a good horse! We keep practicing towards the Grand Prix at home.” 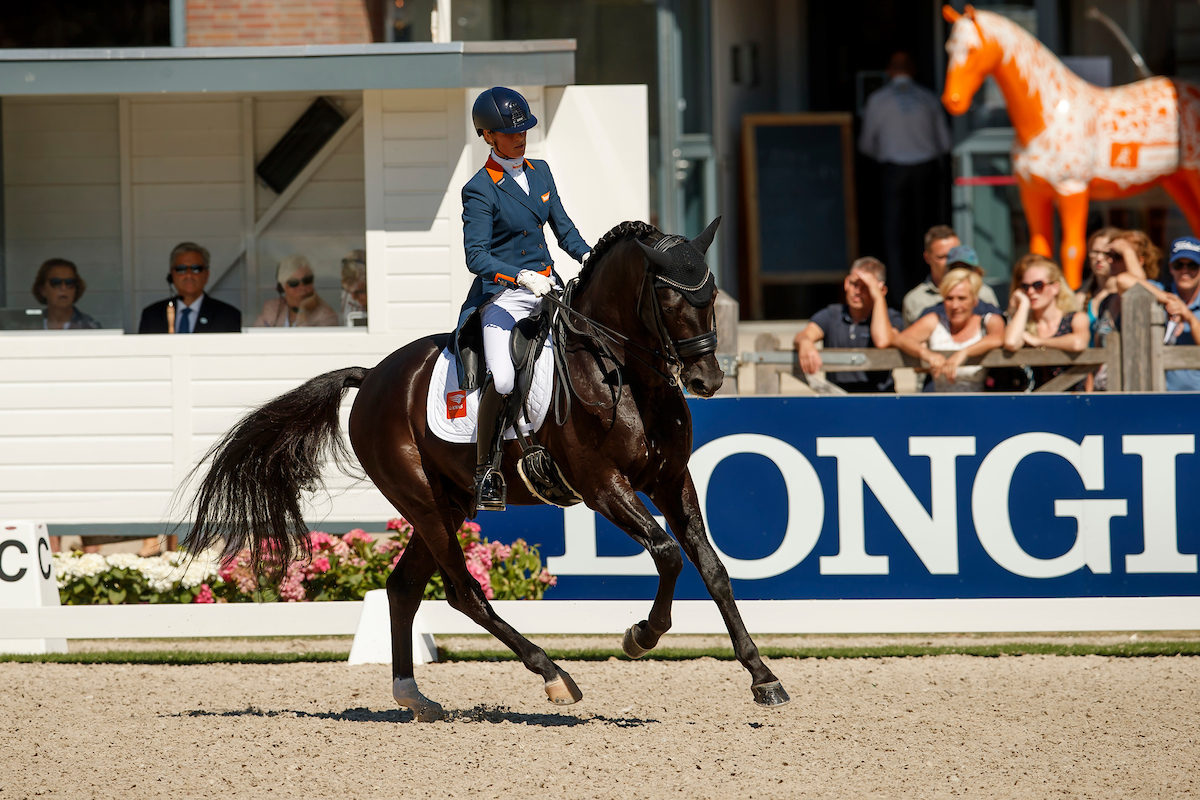 Just like last year, the silver went to Adelinde Cornelissen and the by J.B.J.M. Streppel bred KWPN-stallion Governor, a son of Totilas out of the siter of Adelinde’s previous top horse Parzival (84.143%). The black stallion fluently moved through the test. “Very well presented by Adelinde!”, saud Baarup. “The trot is powerful and elastic and he performed the half-passes so fluently: a 9. The walk is relaxed, with good overtrack, nice rhythm and the talent for collection is evident, an 8.5. In the uphill jumped canter, Governor displays a lot of posture and ability for collection, a 9. And yet, the highest marks are for the submission and perspective, this very well-trained stallion is so obedient, so work-willing: a 9.5. Adelinde is enthousiastic about the stallion of G.A.M. Korbeld. “He always feels so good, it simply was a wonderful ride. Of course, there are always small things that could have gone better, but I am so happy with him: he really wants to do it for me. I am grateful to the owners that they let me ride such an exceptional horse and to the whole team around me, because they are essential. Also credits to the breeders, without them we would be nowhere.” 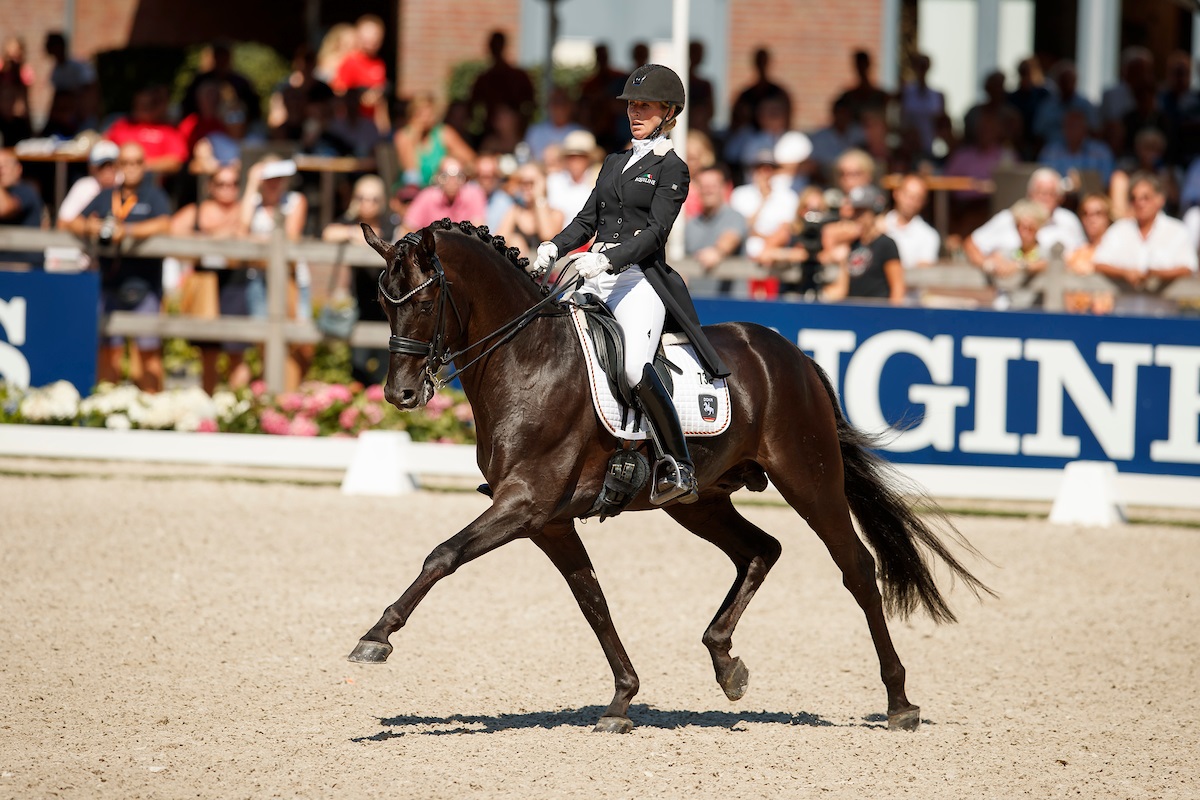 With the KWPN-approved stallions in the lead, the best combinations of the qualification round still had to start, but a big mistake brought the by Johannes Sabel bred Fuersten-Look (Fürstenball x Londonderry) to 84.036% and the third place. Isabel Freese steered the Hannoverian bred stallion to a 10 for his powerful, elastic, light-footed trot. “Lovely use of his body. The walk was spacious and relaxed, a 9. In the big canter he already showed his ability to collect, although he could be a little more active in his hind legs in the extended canter, but unfortunately there was the mistake in the last line. Therefore an 8.7. Unfortunately, we had to take this mistake into account in the submission, even though we are dealing with a work-willing, well-trained horse bursting with potential. An 8.5 for the submission and a 9.3 for the perspective,” says Baarup. “This happens sometimes, unfortunately,” responded Isabel Freese.

President of the jury Jean Michel Roudier was widly enthusiastic about the quality in the final. “What an incredible display of dressage! The horses were presented in a sympathetic manner and I think we will see many of these talents back in the Grand Prix. A big thanks to the organization of this fantastic event and to Longines, because without a grand sponsor there is no grand sports. Finally, also compliments to the breeders, what a group of wonderful horses we have seen today!”